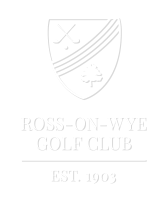 Back in 1898, Major W.S.R. Cox and his brother, Captain J.A. Cox, started organising golf matches on what is known as “The Old Racecourse” at Weir End, leading to the formation of the Ross Golf Club in 1903. There were just 80 members.​

For 22 years, the Club used a course at Alton Court. Players had to cross a railway line twice, climb up to a reservoir 150 feet and avoid the perils of the local rifle range in order to play. In later years, one Club President was known to remark that this course would have “won the prize for the worst course in Europe”.

In 1925, the Club moved to Rudhall where the land was leased for a nine-hole course. In March, the late J.H. Taylor (a many-time Open Champion) came to Rudhall to lay out the course and, around 1957, members began to make noises about wanting a new 18-hole course, one which was within the ownership of the Club.

In 1961, an option was obtained on land at Jays Green. Mr C.K.Cotton, a well-known golf architect, warned that the woodland would be difficult to develop, nonetheless he prepared several alternative layouts and agreed to be the architect. The first nine greens and tees were seeded in the autumn of 1962 and the sowing of the first nine fairways took place in August 1963. That year also saw the marking out of the fairways for the second nine holes and the cleaving of the trees.

In July 1964, the Club played its last match on the Rudhall course. On the 1st August 1964, the first nine holes were officially opened by the Club President, Col. J. F. Maclean, H.M.L., J.P. In late 1963, final approval had been given for the Clubhouse construction which eventually opened in June 1965. Previously, the Club had never possessed more than a wooden Clubhouse, but now enjoys a fine two-storey building with a veranda that boasts splendid views of the ninth and eighteenth holes.

The course (which was officially opened by Mr J. J. E. Pennick, President of the English Golf Union on 7th May 1967) has a length of 6,451 yards with a premium on accuracy due to the attractive but testing tree-lined fairways.